The Year in Books

2013 was busy in so many ways. Our product matured beyond the level I’d hoped it could, we’ve done some incredible mapping work around the world, and I’m just getting started with my involvement in an awesome local hackerspace scene. Even with all that going on, I still managed to read a fair number of great books this year. 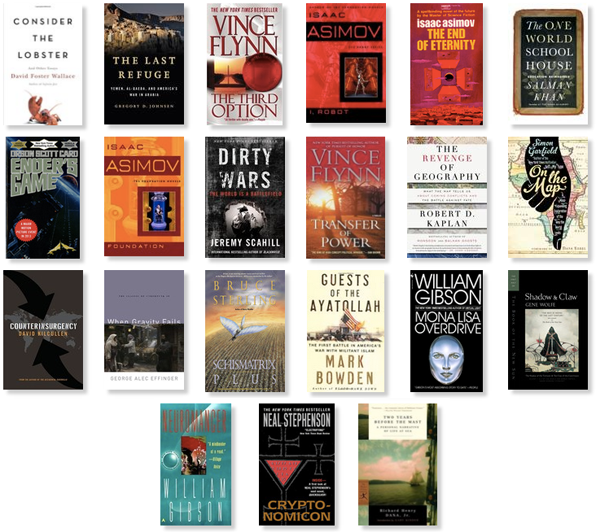 A few thoughts on some of the favorites:

I first read this one back in 2010, but after recently finishing up the Sprawl series with Mona Lisa Overdrive, I had to revisit it. The first time around, I found it difficult to follow and get engaged, but the second reading cemented it as one of my all-time favorites of any fiction. This is one of the seeds that sprouted the cyberpunk scene, a genre which might as well have been invented for me. The setting and culture of the book is completely fascinating, and Gibson’s prose drags you through its cities, space stations, and cyberspaces at pace, but with enough expression that you can taste the Sprawl’s grime and visualize the grandeur of Freeside, the massive spindle-like space station. Gibson’s writing oozes with style; he can turn a drug addict on a computer terminal (er, “console cowboy”) hacking a corporate network into an action anti-hero. I highly recommend this book to anyone.

In this one, Effinger reverses the traditions of futuristic settings, with the West in decline and the Levant as the world’s economic core. It’s the first of a three-part series featuring Marîd Audran, a hustler from the Maghreb who lives in the fictional Arab ghetto of the Budayeen. In the slums and backalleys of the Budayeen, blackmarket clinics offer its brain-wired citizens installation of cybernetic add-ons and full personality replacement mods. Audran is an unmodified traditionalist (and drug addict), but quickly finds himself in the debt of Friedlander Bey, the Budayeen’s resident paternal crimeboss. The story follows Audran as he must himself get “wired” in order to track down a serial killer committing a string of inexplicable murders. Loved this unconventional work of cyberpunk, and looking forward to getting to the next two parts in 2014.

I’ve had DFW on my reading list for years, but this first book of his I picked up is actually a collection of essays rather than fiction. Many of the pieces in the collection are works of journalism, with Wallace covering events or reviewing books. Reading a writer of his caliber covering something like the Maine Lobster Festival, or following the 2000 McCain campaign is rare, and his outsider’s point of view is refreshing.

The Revenge of Geography, Robert Kaplan. 2012.

I had been on the lookout for some time for a book about modern geopolitics, and this one was excellent. Kaplan begins by setting the historical context with the ideas of early geopolitical theorists. The central ideas of “sea-centric” vs. “land-centric” power are explained — the Rimland vs. the Heartland — and how significant historical events revolved around these two central strategies of geographic positioning. Kaplan then goes on to analyze the regions of the modern world, their connections with one another, and conjectures interesting possible outcomes, all through the lens of geography.

This one really surprised me, one of my favorite works of sci-fi. I wrote a post a couple months ago with my thoughts on this book, but suffice it to say that it’s my favorite piece of time travel fiction. And if you’ve watched Fringe, you’ll see the deep influence of this novel about 20 pages in.

The One World Schoolhouse, Salman Khan. 2012.

Our public education system is deeply flawed. In this book, Sal Khan analyzes the fundamental problems and posits a potential way forward. He’s the founder of the Khan Academy, one of the largest players in the world of MOOCs, striving to build an approach and set of tools to bring the same level of education worldwide with minimal access, and to wean ourselves off of the old world, hyper-structured Prussian education system we’ve been following for over a century. I have a deep personal interest in our education system, particularly the almost total lack of representation of my field as a foundational layer in primary and secondary schools.

Shadow of the Torturer & Claw of the Conciliator, Gene Wolfe. 1980.

I’ll round it out with the first two parts of Gene Wolfe’s Book of the New Sun tetralogy. The series is set on a distant future Earth, and follows Severian, a torturer of the “Seekers for Truth and Penitence” (the guild of torturers) responsible for holding and extracting information from political prisoners. The depth of these novels is unmatched, and they’re quite difficult to follow at first. Severian tells the story in the first person, is sometimes an unreliable narrator, and from his point of view many places and things that cross his path he misidentifies or misunderstands, having never left the torturers guild until his exile. Wolfe uses language that is arcane or dead, many of the words derived from Greek or Latin (a few examples: fuligin, autarch, archon, aquastor, optimate), which will send you to the dictionary frequently. Becauses of the complexity of the story and writing, this was my second attempt to read these two books. If you make it through the first quarter, you’ll be handsomely rewarded with one of the most fascinating, deep, and original fantasy stories ever written.