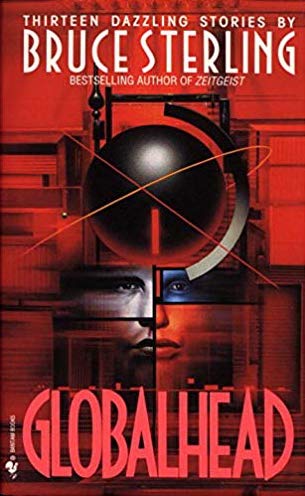 The short story is the perfect format for science fiction. A genre that’s keen on high concepts that can be very interesting often finds itself overreaching when certain concepts can’t sustain themselves through a 400 page full-length novel.

Bruce Sterling, one of my personal favorite authors, thinkers, and self-described “futurist” is one of the best in the business with the format. Globalhead is one of these collections from the early 90s, an eclectic mix of stories of varied genres — speculative fiction, post-apocalyptic, cyberpunk, crime thriller, Victorian steampunk — I begin to wonder if there’s a subject Sterling hasn’t dabbled in.

Of the group of 13 stories collected in Globalhead, 4 or 5 stood out to me as memorable and established worlds and characters within that I could see carrying their own longer-form works. Here’s a brief breakdown of my favorites from the bunch.

This one is presented as an excerpt from a historical archive about an event that spawned a terrible, irreversable genetic virus. Gene hackers, in a effort to cure AIDS and other genetic diseases develop DNA modifications that give humans a massive boost in neural capability, but has disastrous side effects including giving the same boost to many other species of mammals (and spawns an intelligent raccoon society with its own advanced culture). It’s a short, humorous setup without much substance, but surprisingly thought-provoking.

A speculative fiction piece (in collaboration with author John Kessel about what can go awry with positive medical breakthroughs. After a life-extending drug is developed, the world is fragmented into tribal bandit groups and rival factions looking to hoard and protect supplies of the drug. The world is shown through the eyes of a scavenger playing the groups off of one another to his own advantage. The twist at the end is pretty slick for a short story to pull off. The world-building here is excellent — this is one of the bunch that could likely hold its own conceptually as a standalone work.

This one is a sign of the times, a hallmark of the Cold War era in which Sterling was writing much of his best stuff during the 1980s. This is another one with a co-author, this time cyberpunk writer Rudy Rucker. The plot here is presented as a retelling of a secret, unknown event in the history of the Soviet space program1. It starts out as a fairly conventional science fiction story about a couple of space program engineers gets progressively more wild as they trek off to remote Siberia where a historical event unhinges the characters from spacetime. Like I said, Sterling can really sprint with a concept.

I’ve got copies of both Mirrorshades and Crystal Express, two other collections by Sterling that I’m eager to dig into. The first is actually an editing credit — cyberpunk stories penned by others and collected and annotated by Sterling.