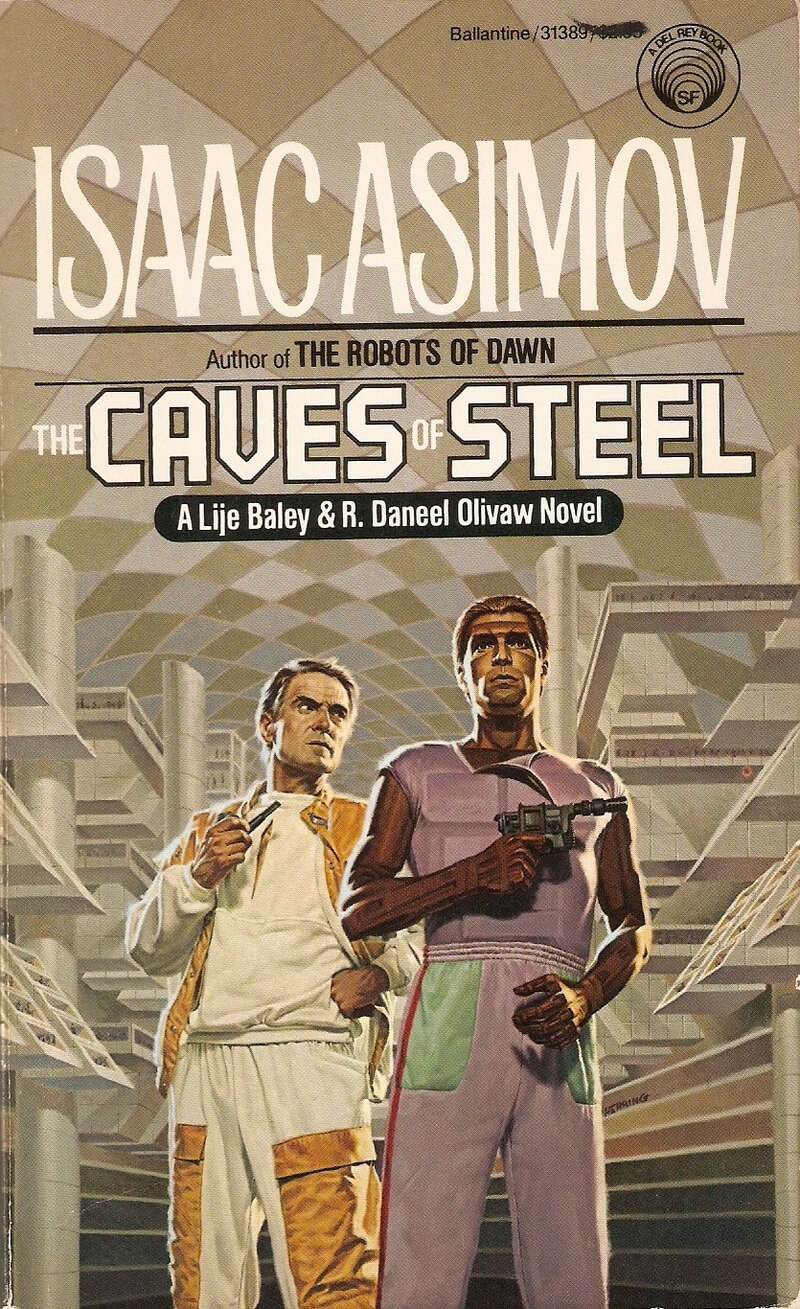 The Caves of Steel by Isaac Asimov

This is part three of a series on Isaac Asimov’s Greater Foundation story collection. This post is about the first installment of the Robot trilogy, The Caves of Steel.

We’re still early in the timeline of Asimov’s epic saga. The short stories in I, Robot set the stage for dozens of future novels that take place in the same universe and along the same timeline. The far-future stories of the famous Foundation series have threads leading all the way back to the “3 Laws” and the Robot series, which starts off the action on Earth. The Caves of Steel is the first Robot entry, introducing the recurring character of Lije Baley. With this one, we set the stage for humanity’s eventual galactic expansion.

While I, Robot and Asimov’s other robot story collections lean toward the cerebral and philosophical, The Caves of Steel is a murder mystery, buddy cop procedural.

The setting is New York City millennia from now, on an inhospitable and mostly ruined Earth where humans are collected in domed megacities. In between the dense urban complexes the landscape is barren and in ruin. The city’s inhabitants never go outside, living 100% of the time within the “caves of steel”. As a result, Baley suffers from debilitating agoraphobia. Just outside of New York is Spacetown, a colony of “spacers” — humans from the 50 or so nearby “spacer worlds” that had been colonized hundreds of years before that return to Earth for trading purposes. Spacers look down on the “earthmen” as dirty, diseased, and lesser people. And while people of Earth have banned robots from their cities, spacers embrace them and promote the spread of human-robot cooperation.

Baley’s set on a mission to investigate the murder of Roj Sarton, a spacer roboticist from the planet Aurora that turns up dead in the outpost of Spacetown. Baley serves as the classic gut-driven detective cop, paired on the case with a humanoid robot partner named R. Daneel Olivaw, the straight-laced logical one of the duo.

The earthmen have a general distrust of robots, fearing that they’ll take their jobs. Most robots are machine-like, purpose-built laborers or assistants, but R. Daneel is humanoid, a spitting image of his creator, whom we later find out is the murdered Dr. Sarton. Baley is initially unaware that Daneel is a robot, but is impressed by his incredible investigative abilities. Through their work together hunting for the culprit, Baley comes around on his opinion of robots, eventually agreeing with the spacers that humans and robots should cooperate to expand to other planets.

The setting is fascinating given the year it was published. The urban sprawl megalopolis has been the host of countless sci-fi works over the last 50 or 60 years. Not to say Asimov invented the concept, but his version must have been in the minds of the creators of Coruscant, The Sprawl, or Los Angeles 2019. To his credit, Asimov does do a decent job with the political elements of spacer vs. earthman, the “medievalist” Luddites vs. the pro-robot camp. The resolution to that conflict is what plants the seed of the Galactic Empire trilogy. Given that he published these in all sorts of mixed up order, it’s impressive how well they hold together as a chronological series1.

Aside from being a passable mystery tale, Asimov forms something of a parable about the risks of unjustified prejudice and presumption. The medievalist hatred of spacer outsiders has for hundreds of years stifled the advancement of Earth livelihood. Human survival is dependent on moving forward rather than standing still, and the elimination of prejudice from both sides (Earth to Aurora and vice versa) is essential to each’s survival; the Spacers and Earthmen need each other. Without the spacer worlds the Earth is in a tailspin of destruction, and the spacers have created societies too uniform and isolated, with shallow gene pools that need an injection of diversity after shunning outsiders for thousands of years.

I was pleasantly surprised with the quality of storytelling. Asimov puts together a compelling “whodunit” that had me hooked until the final act when the crime’s details are uncovered.