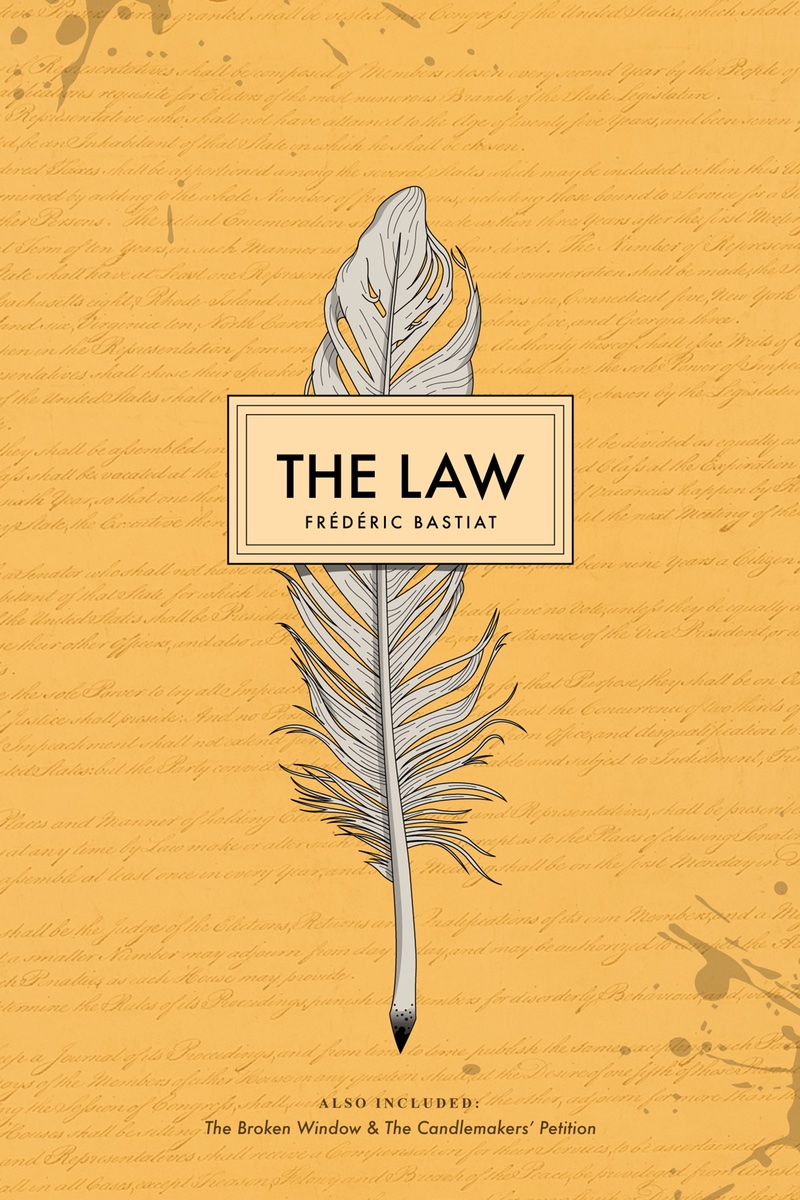 The Law is an extended essay by French philosopher Frederic Bastiat on what it means to implement “rule of law” — on what “the law” in this context means, what its intent should be, and how it should be determined. It’s one of the foundational texts of the libertarian, classical liberal philosophy, cited as a key influence by the likes of Milton Friedman and the Federalist Society.

The thesis of the essay is on the law as an instrument of natural rights, universal rights that precede government. Life, liberty, and property existed prior to man-made laws, and were largely the causes of mankind needing to document rights for protection. Bastiat defines “law” this way:

“The collective organization of the individual right to a lawful defense”

All three rights — life, liberty, and property — must be preserved together, because to preserve any one of them, you must preserve the other two. Natural rights are a package deal. 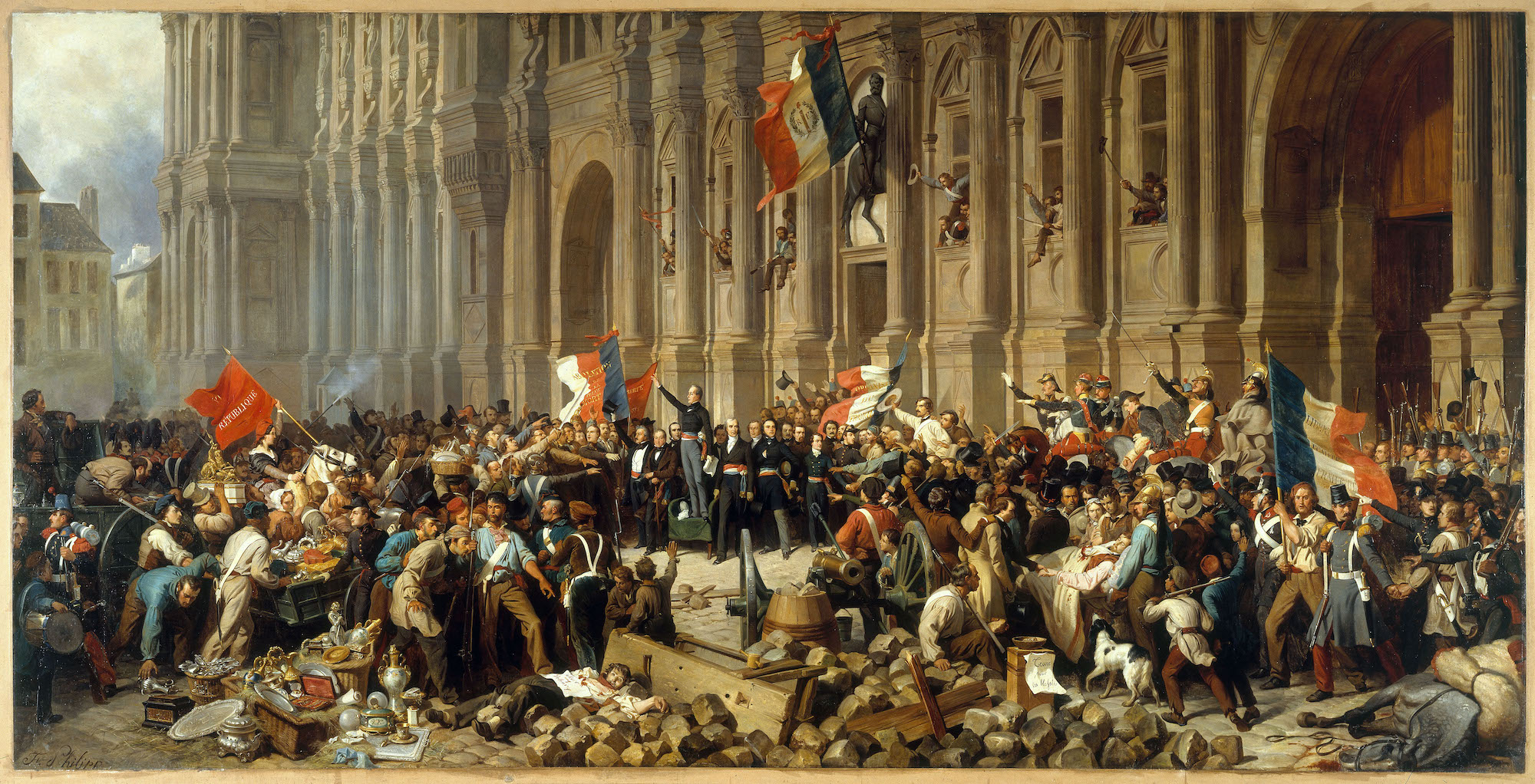 Lamartine in front of the Town Hall of Paris, French Revolution of 1848

But people have a tendency to want prosperity at the expense of someone other than themselves, a natural tendency to free-ride. Thus there’s an inevitable compulsion to pervert the law for personal (or “special interest”) benefit. Bastiat attributes this perversion to 2 primary causes: stupid greed and false philanthropy. He spends much of the first half of the essay on the concept of “plunder”: the act of using perversion (and the protection) of law to circumvent the work required to achieve particular ends. Take from one group and give to another. To protect monopolies. To exclude groups from the right to suffrage.

He groups types of “plunder” into the illegal and legal varieties. The illegal type we’re familiar with: the likes of theft, vandalism, murder. But legal plunder is what Bastiat worries about. Legal plunder is when the law is used as a means to take and give, or benefit one at the expense of another, in a way that would have you in jail if you tried such a thing as an individual. Tariffs, protections, subsidies, guaranteed jobs, minimum wage — each is an example of “legal plunder”, where the state uses the law as a shield to direct society to specific ends, in violation of individuals’ rights.

The law should be seen as a negative concept. Not negative in its typical connotation, but rather negative as in defensive. The law should seek to reduce its footprint to only what needs doing to defend the natural rights of the individual. Justice is something we achieve by removing all of the injustice, not by imposing injustices on one group in compensation for a past injustice to another. This merely perpetuates the problem legislators are seeking to repair in the first place. I’m reminded here of the principle of via negativa, the idea that we can simplify a concept to its basic principles by removing all that’s unnecessary.

The latter half of the essay is a screed against socialism, laying out many of the arguments against the socialist state you see in libertarian or conservative circles today, what he calls “the seductive lure of socialism.” Bastiat says that legislators desire to mold mankind, but that mankind doesn’t need molding. And the act of molding itself requires a perversion of the law in order to permit legislators the scope of rights-violating necessary to impose their worldview on society at large.

Bastiat sees socialism on a continuum, in between protectionism and communism. First there’s an initial budding of an idea that the law may impose a particular direction on society, then in the extreme, communism is complete plunder:

It is to be pointed out, however, that protectionism, socialism, and communism are basically the same plant in three different stages of its growth. All that can be said is that legal plunder is more visible in communism because it is complete plunder; and in protectionism because the plunder is limited to specific groups and industries. Thus it follows that, of the three systems, socialism is the vaguest, the most indecisive, and, consequently, the most sincere stage of development.

This part of the essay spends a lot of time on the intellectuals’ influence on this direction away from open societies and individual rights. Socialist intellectuals (in the mold of Sowell’s “unconstrained vision”) see themselves as the shapers of the ideal society. And the law is an instrument to achieving desirable ends.

In fact, these writers on public affairs begin by supposing that people have within themselves no means of discernment; no motivation to action. The writers assume that people are inert matter, passive particles, motionless atoms, at best a kind of vegetation indifferent to its own manner of existence. They assume that people are susceptible to being shaped—by the will and hand of another person—into an infinite variety of forms, more or less symmetrical, artistic, and perfected.

This whole section is reminiscent of another of my favorite works: Karl Popper’s The Open Society and its Enemies. Bastiat calls back to the origins of this worldview in classical antiquity, in particular the works of Plato (whom he doesn’t mention by name, but references the work of).

One of my favorite lines toward the end of the essay demonstrates the danger of abusing the law for utopian ends:

The law is justice—simple and clear, precise and bounded. Every eye can see it, and every mind can grasp it; for justice is measurable, immutable, and unchangeable. Justice is neither more than this nor less than this.

If you exceed this proper limit—if you attempt to make the law religious, fraternal, equalizing, philanthropic, industrial, literary, or artistic—you will then be lost in an uncharted territory, in vagueness and uncertainty, in a forced utopia or, even worse, in a multitude of utopias, each striving to seize the law and impose it upon you.

Just as the gardener capriciously shapes the trees into pyramids, parasols, cubes, vases, fans, and other forms, just so does the socialist writer whimsically shape human beings into groups, series, centers, sub-centers, honeycombs, labor-corps, and other variations. And just as the gardener needs axes, pruning hooks, saws, and shears to shape his trees, just so does the socialist writer need the force that he can find only in law to shape human beings. For this purpose, he devises tariff laws, tax laws, relief laws, and school laws.