Within the legacy publishing industry, Stripe’s young publishing press is refreshing - it is Sutherland’s electric cover art on a dusty, tired bookshelf. An Authoritative Look at Book Publishing Startups in the United States by Thad McIlroy states, “Book publishing has never been a technology-adept industry; indeed it is historically technology-averse. This is a challenge for the (minority of) startups targeting existing publishing companies.” Stripe Press is different because it was born from a technology company. It is a strategic asset because it allows Stripe to shape and share influential knowledge with its interconnected ecosystem of entrepreneurs, businesses, authors, and technologists.

Her post gives a good summary of why Stripe Press is exciting for the book publishing industry. The catalog only sits today at 10 titles, but I believe 4 those were released this year. The pace has been increasing, but they keep elevating the quality bar.

They’re not only attracting original works like Nadia Eghbal’s excellent Working in Public (2020), but also breathing new life into notable books from the past. Both Martin Gurri’s Revolt of the Public (published in 2014, one of my favorites this year) and Donald Braben’s Scientific Freedom (2007), to name two examples, saw relatively small initial publishing runs. The editorial staff over at Stripe is doing amazing work to bring these books back into wider circulation using a spotless curatorial eye for the noteworthy and influential.

Stripe Press is, of course, producing excellent books for us to read, and giving authors writing about technology a channel for getting their work out there. But it’s also a marketing channel for Stripe.

I have a soft spot for quality content. The best content marketing doesn’t feel anything like marketing. Its value is so deep you don’t even think about what you’re giving in return to its creator.

The tech companies of the last 20 years didn’t invent content marketing, though our scene talks about it more than any other. Even Ben Franklin used a content marketing play when he published Poor Richard’s Almanack as a way to promote his printing business.

The scene is now full of companies that embrace the multichannel returns they can drive through quality, helpful content. A few favorites of mine:

Not only does Stripe do a stellar job at the traditional CM channels — blog, help guides, developer documentation, email — they went farther than anyone and became a book publisher1.

What differentiates Stripe as a publishing house from the HarperCollinses or Hachettes is that it’s not their core business, but a component that drives other parts of the business. Direct sales revenue is only 1 channel of value they’re deriving from putting this catalog in print. Stripe sees their Press group as a content marketing strategy, especially to raise global interest in technology, pushing their mission to “raise the GDP of the internet.” At the most tactical level, the Press catalog increases interest in tech, creates more founders, who then start companies that become Stripe customers.

I linked a while back to Max Olson’s excellent post Advantage Flywheels, which presents a great framework for analyzing the causal loops that power businesses. Irrespective of Press, Stripe’s built a fantastic advantage with feedback loops combining in powerful ways. Using Max’s same architecture of flywheel archetypes, I took a stab at drawing out what Stripe’s machinery looks like, with its products in blue: 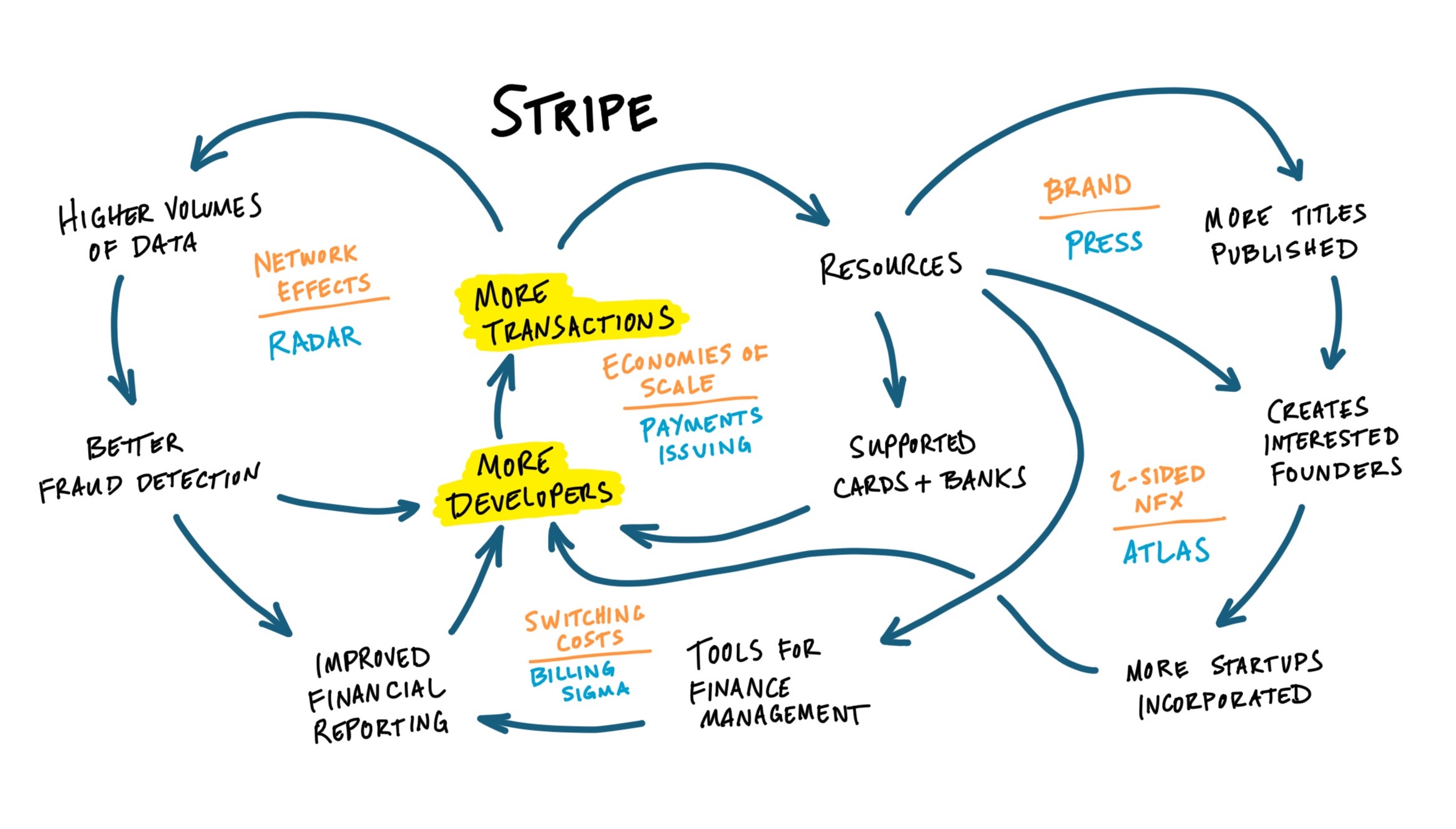 At its core, Stripe serves developers who build applications which expand in usage and generate financial transactions.

Spinning off from those central inputs and outputs are several flywheels that create momentum that feeds back into the core business. Radar does fraud detection, which improves with masses of transaction data. Billing and Sigma are tools that improve finance management and reporting. Atlas helps founders incorporate and get started, thereby generating more customers for Payments, Issuing, and more. That’s where I see book publishing fitting into the machine: as a mechanism to expand the TAM for internet businesses.

Press is unique in this regard for a tech content strategy. Normally something like a blog, video channel, or newsletter would be tied more directly to the “more developers” nexus, but for Stripe, book publishing is playing a longer game. Even though this feedback loop has a long time delay (publishing a book won’t make a new founder overnight), I believe it’s a powerful one. The best strategies serve more than one function; Press is a brand builder, a recruiting tool, a direct revenue driver (from book sales), and most importantly, a way to increase the number of people interested in technology over the long term. Founder Patrick Collison himself described this exact strategy in response to a Hacker News thread:

The vast majority of Stripe employees (and there are now more than 1,000) work on our core functionality today. But we see our core business as building tools and infrastructure that help grow the online economy. (“Increase the GDP of the internet.”) When we think about that problem, we see that one of the main limits on Stripe’s growth is the number of successful startups in the world. If we can cheaply help increase that number, it makes a lot of business sense for us to do so. (And, hopefully, doing so will create a ton of spillover value for others as well.)

Stripe’s long been known for it’s writing culture, so I suppose it’s also not surprising that a company of readers and writers would want to make books.

When you pop the hood on a strong business like Stripe, you’re always likely to find interesting systems dynamics — multiple outputs feeding other inputs. It’s fascinating that an old, traditional business like publishing could be done in a novel way like this. They’re positioned to bring in new innovations for authors (and readers) that they haven’t scratched the surface on yet; it’s still just paper books. If there’s room for innovation in writing books, Stripe will find it.