I recently took a trip to Tunis to attend the GCT-Tunisia conference, a geospatial industry event focused on capacity building and promotion of mapping tools in the fluid and exciting region of North Africa. It was a fascinating trip to visit a place at such a turning point in its development. Both Tunisia and Libya, each of which had significant representation at the conference, are still just 3 years out from revolutions that unseated regimes in power for decades. It was a welcome opportunity to visit during this period of transition (yet relative safety and stability). 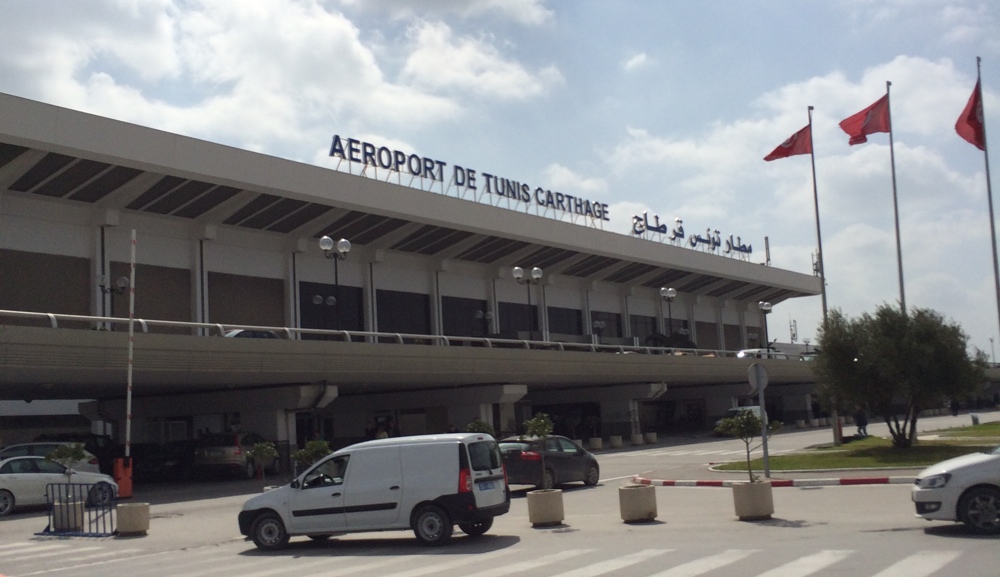 Traveling from Florida to North Africa is a trek. We flew through JFK Airport in New York, to Atatürk Airport in Istanbul, then onto Tunis-Carthage. For the international legs we flew on Turkish Airlines, which was a first for me. Turkish didn’t have the luxury-by-default feeling of the Gulf airlines, but it was comfortable. And for being an international hub and one of the busiest airports in the world, Atatürk was easy enough to transit between gates and move through security. Even at 5am local time, the airport was a swarm, with a varied crowd that proved Istanbul really is “where east meets west”.

The flight to Tunis left early in the morning local time. There were some fantastic views of the Greek islands and Sicily’s Mount Etna from my window seat. Tunis-Carthage Airport is right in the geographic center of the city. From the east, you fly in right over the Lake of Tunis, a natural lagoon encircled by the city. Passport control was slow, but easy, and the terminal was bustling with people. We caught a car ride to our hotel - about a 20km drive through La Marsa up along the beach to Gammarth. For a city that underwent a revolution only 3 years ago, there are few visible signs. We heard from some of the locals that before and during the revolution, much of the European expat population left the country, but things seem to be recovering strongly. Our hotel and the neighboring ones on the waterfront were crowded all week with people from Europe and all over the region. 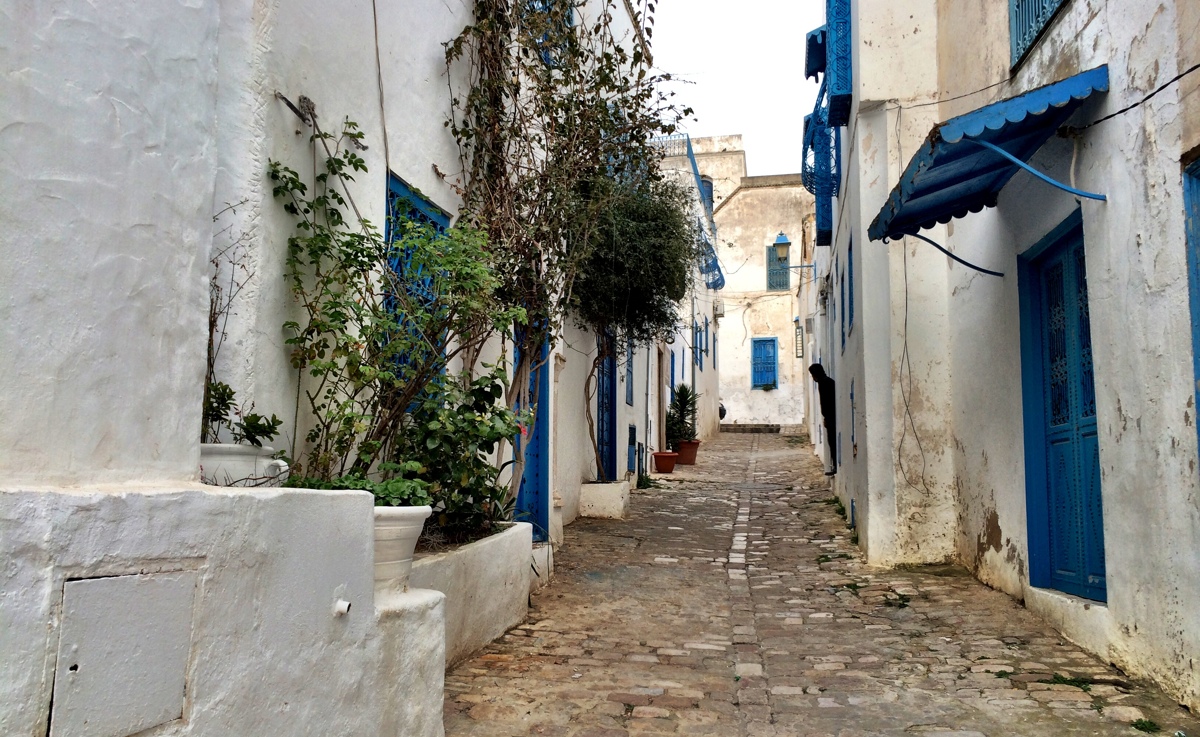 Early in the trip we visited the old town of Sidi Bou Saïd, which is a fascinating hilltop settlement and tourist spot with amazing views overlooking the Mediterranean. It’s packed with shops selling mostly artwork — paintings, pots, dishware, and the like. Since it’s positioned on the center of a bluff above the waterfront, it has labyrinthine streets winding between distinctive white and blue buildings. We didn’t do much here but buy some gifts for those back home, then eat some pizza at a nearby local joint.

The highlight of the trip was toward the end of the week, when the conference organizers put together an excursion tour that took us south to a town called Zaghouan, to visit an ancient Roman water temple at the base of the mountain. We hopped into a tour van early on Friday to make the journey into the countryside to Zaghouan, which gave Patrick and I ample opportunity to snap photos from the road (for some post-trip OpenStreetMapping). On the way out of town we stopped near the ruins of Carthage to see the destination of a 3000 year old aqueduct that once led to the cisterns where the Romans stored and supplied the city with water from the mountainous south. About 30 km south of Tunis we stopped on the roadside to see the remnants of the aqueduct, at a point where it’s remarkably well-preserved. It feels unbelievable to stand beneath a structure nearly 2000 years old and marvel at the fact that even this form of ancient plumbing is still standing. There are even sections of it where the original water pipeline is still covered and intact. 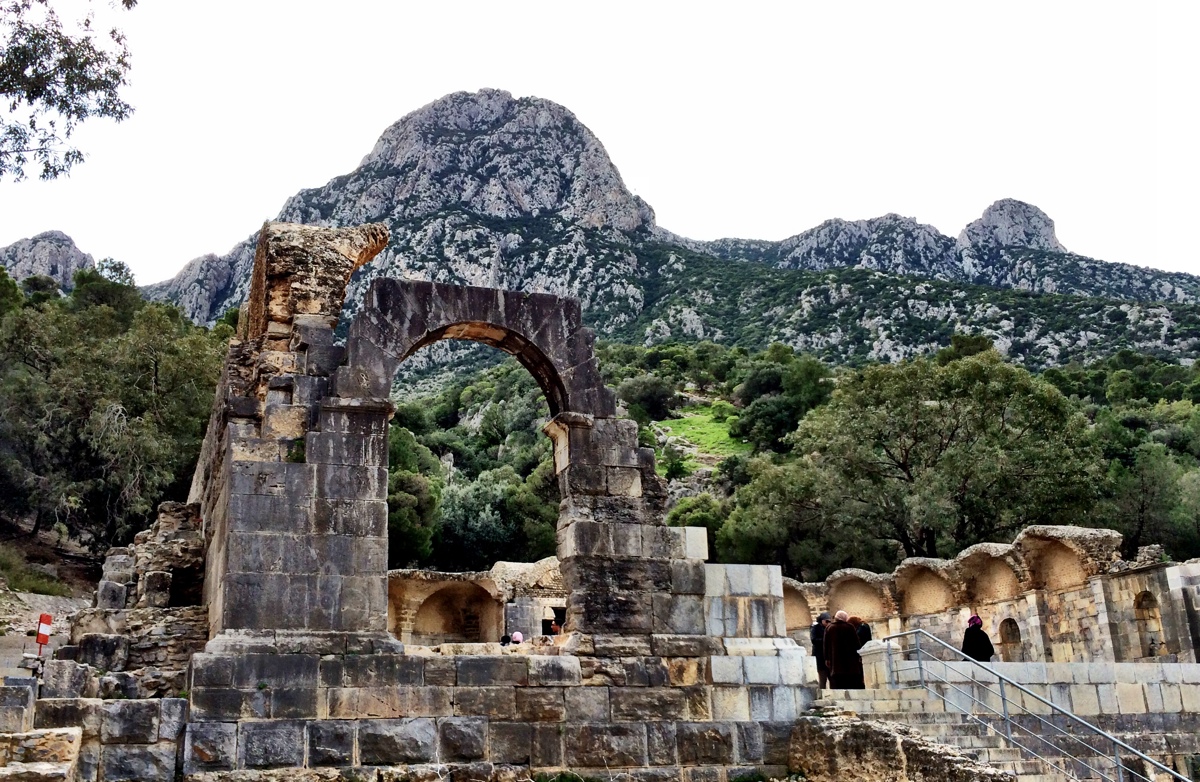 Another hour or so of driving took us into the city of Zaghouan, which sits beneath Djebel Zaghouan, a craggy mountain that’s one of the northernmost peaks in the Atlas range. We wound our way up the streets into the foothills, to the “Temple des Eaux”, the Roman water temple. The Romans built the temple on top of a spring in the second century AD - it served as a place of worship, and the source of the aqueduct that supplied water to Carthage via the aqueduct. You could see the pipe where water was siphoned from the spring emerging from the side of the hill, where it slowly pitched downward onto the top of the aqueduct for its 100km downhill trickle. The views from the temple are incredible. The climate and topography make it feel like you’re in southern California, overlooking the olive orchards and almond plantations of the surrounding area. With our fellow geographers out in the field, everyone naturally couldn’t help but do some surveying while on site at such a historic place. One of our tour-mates, a surveyor that builds and operates 3D laser scanners, broke out the devices to gather some high-resolution scans of the temple site.

About 20km west of Zaghouan is the smaller town of El Fahs. There we were visiting the ruins of a Roman city called Thuburbo Majus. On a hilltop a few kilometers from the main town, it’s quiet, calm, and stunningly well-preserved and protected. We arrived there in the mid-afternoon to an empty site. There were two staff guards at the entrance that let us in, then we pretty much had the entire site to ourselves. The road through the site dates from nearly 2,000 years ago, and various of the structures were built over the next 3 or 4 centuries. The highlight of the walk through the ruins, for me, was an archway between the baths and an elevated temple, dating from the time of the Punic Wars — narrow, perfectly constructed, and still standing after 20 centuries. Completely unbelievable, and at a site with relatively little oversight or protection. I could touch the arch when walking beneath it. 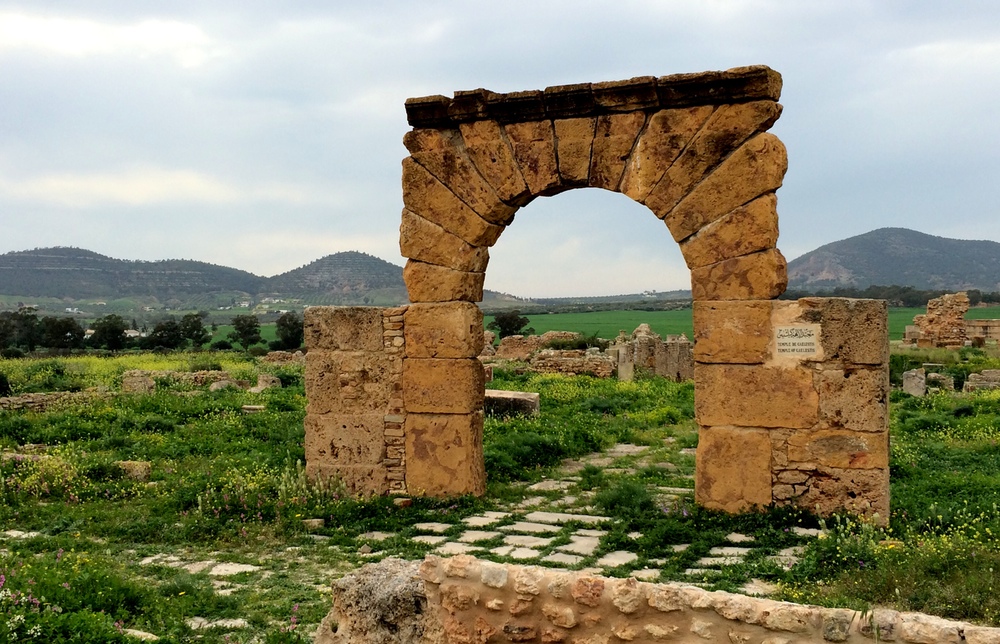 Up on the site of the old forum, some local boys were kicking the football around. I overheard an argument about who was “Cristiano” as they were chasing the ball up and down the stairs to the columns of the capital. 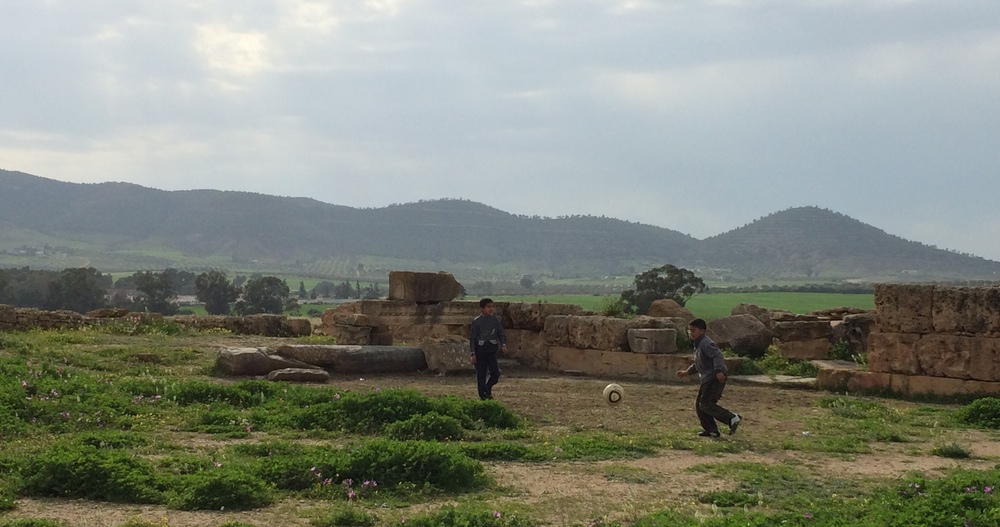 The wildflowers were so dense we could barely walk through them. I got some video walking through the “House of the Auriga” and the Winter Baths. A stunning place to get to visit, with beautiful weather the whole day of our excursion.

I’ve posted a bunch of photos from Tunis and the excursion up on Flickr.