The specification for Ethernet was proposed in 1973 by Bob Metcalfe as a medium to connect the expanding network of computers at Xerox PARC. This was a schematic he drew as part of the memo proposing the technology to connect the machines together: 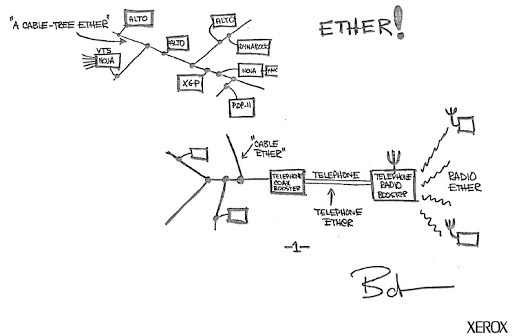 From this Wired article:

PARC was installing its own Xerox Alto, the first personal computer, and EARS, the first laser printer. It needed a system that would allow additional PCs and printers to be added without having to reconfigure or shut down the network. It was the first time that computers were small enough for hundreds to be in the same building, and the network had to be fast to drive the printer.

Metcalfe circulated his plan in a memo titled “Alto Ethernet.” It contained a rough schematic drawing and suggested using coaxial cable for the connections and using data packets like Hawaii’s AlohaNet or the Defense Department’s Arpanet. The system was up and running Nov. 11, 1973.

It’s amazing how simple many foundational technologies start out: a simple comms medium meant to connect their computers to a shared printer. Now the same tech is the backbone of almost every local network.